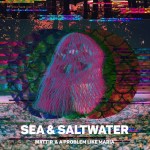 The harsh robotic distortion produced on Maria’s voice by Mattir makes the song the perfect combination of wacky electronic dance sonic character but at the same time, still has that pop character shining out of the depths of the water.  Yet this is all coming from the guy who loves Ween’s Pure Guava album.  It’s equally a very playful track too.  And then you have All Fall Down which has that sonic character of a haunting night at a graveyard which is kind of why it was originally on Hailloween album.  All Fall Down also has Water Gun Water Gun Sky Attack featured on it, and his Texan voice is showcased on this scary pop track.  Oddly it still seems to have a feel of London Bridges falling down in phrasing and pieces of the lyrics but has it’s own uniqueness that really can’t be described perfectly because it’s just a hair too cheerful, not to factor that I may have changed it’s character a bit in mastering of it to be louder.